“It was really a great concert with an uncommon program, new and interesting discoverings and everything played in the highest level.”

“Concerts of this kind, marked by its originality and embarked on the path of adventure, worthy of all praise.”

“I welcome the foundation of this ensemble since people who are working in early and contemporary music look further, beyond conventions and the norm. At the end our hearing is expanded.”

Since its foundation the ensemble has combined contemporary repertoire with Middle Age, Baroque and Renaissance works in its concerts throughout Europe. With its original scoring of recorder, baroque violin, viola da gamba and harpsischord, it has premiered pieces of different aesthetics and formats (electronics, video, poetry, improvisation), showing a wide palette of expressive possibilities of the ensemble. Continuum XXI has also premiered several works originally written for historical instruments. This is the case of the composers Peter Ablinger, Raphaël Cendo, José M. Sánchez-Verdú, Alberto Bernal, Helga Arias, Sergio Blardony, Manuel J. Sánchez or Sandra Lanuza.

Since 2018, Continuum XXI has been part of the “Contemporary Music Support Program” of the German Musical Council (Deutscher Musikrat, Förderprojekte Zeitgenössische Musik) as a young and innovative initiative, which refers to our ensemble in the following terms: “It was a great concert with an uncommon program, new and interesting discoveries and all played to a very high level.”

Continuum XXI has won the Cesar-Etopia Labs 2020 residency and published the interdisciplinary work Continuum XXI: TRACES with visual artist and composer Joan Gómez Alemany. The ensemble has also been interviewed in RNE (Musica Viva) or in the online magazine SulPonticello and selected for the prestigious Libro de Oro de la Música Española (Melómano). At present, the ensemble works closely with renowned composers, of whom it is going to perform world premieres in Germany, Portugal, Spain and other European countries. In addition, Continuum XXI collaborates with artists from other disciplines, such as the theater group “theatrale subversion” in their programs Ritual Reloaded or Music of the extremes.

Interview in the online magazine SulPonticello | Continuum XXI: feedback between past and present (Spanish).

My motivation in CXXI:
My goal is to have a broad perspective of what music is as a whole, thus achieving an inclusive vision of all the possibilities that we have available to be contemporary musicians with all the baggage of history in our favour.

My reference pieces are:
Early Music: Overture-Suite TWV 55:a2 by G. P. Telemann for recorder and orchestra.
Contemporary Music: Gesti by L. Berio.

My motivation in CXXI:
My purpose with Continuum XXI is double: on the one hand my personal wish is that the recorder gains importance and perspective in the future as an instrument, that is, that its importance and versatility are shown as they were during its golden age; their technical possibilities in favor of the contemporary composition that the instrument has and that is how it consolidates more in the present. The second thing that motivates me is to show a musical idea of a project that is so different, beautiful and functional, as well as breaking stereotypes and pigeonholing of historical instruments.

My motivation in CXXI:
I seek to show the wide range of expressive possibilities of the viola da gamba both as a soloist and in chamber groups. On the other hand, I am especially motivated to expand the current repertoire written for this instrument that, in my view, is of great versatility and richness. It can navigate from the most brutal to the most delicate, it is capable of changing from the role of accompanist to soloist with ease and its particular timbre is especially attractive. I think I should have much more presence in concerts of Ancient and Contemporary Music.

My motivation in CXXI:
To reclaim the validity of the acoustic resources offered by period instruments for the
avant-garde musical creation and to emphasize the conceptual convergences existing
between Baroque repertoire and several Contemporary trends. My motivation in CXXI:
I wish that Continuum XXI establishes its scoring as standard instrumentation and breaks the historical discontinuity that exists in the repertoire written for historical instruments. That in the future to compose for recorder or harpsichord is as common as to do it for modern flute and piano. Or flute and video. To search beyond conventions and offer new expressive possibilities to current composers.

From its initial core, the CXXI scoring expands and collaborates with musicians and artists from other disciplines: on our horizon there are concerts that include baroque percussion, voice, dancers, etc. This is the case of Paula Piñero, Sandra Lanuza, Joan Gómez Alemany, or the theatre collective theatrale subversion. 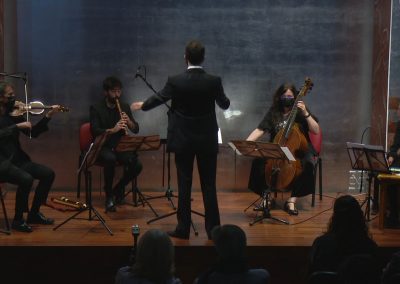 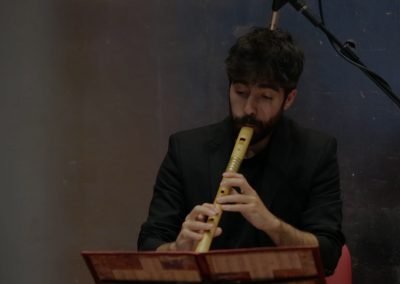 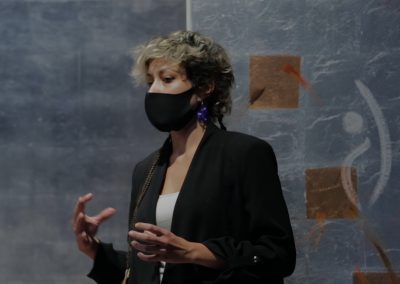 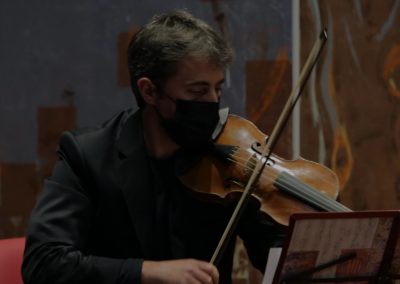 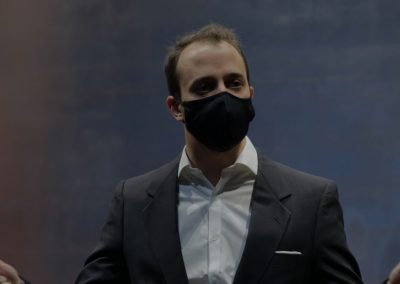 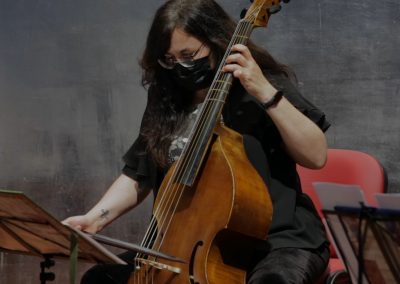 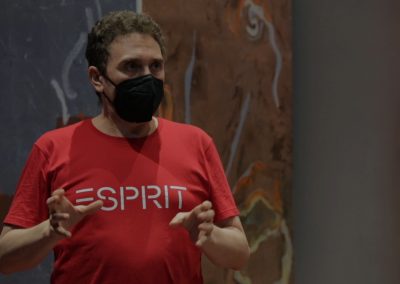 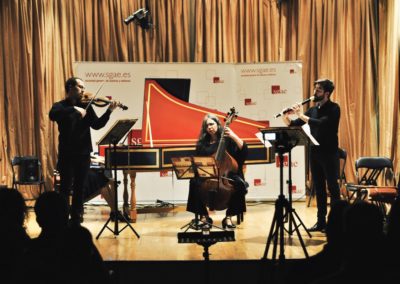 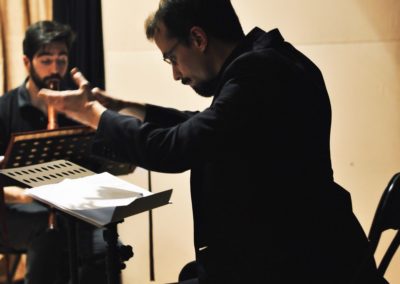 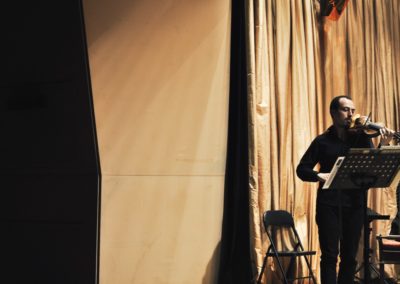 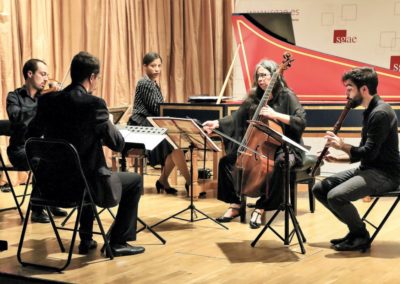 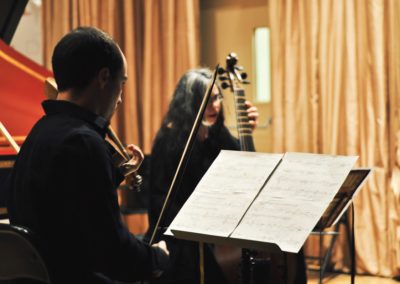 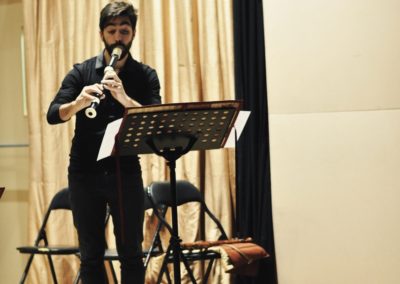 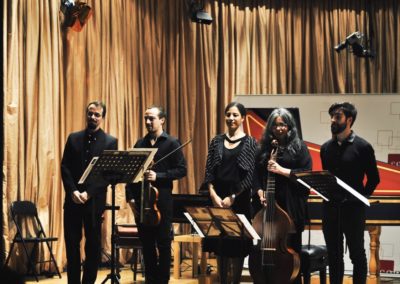 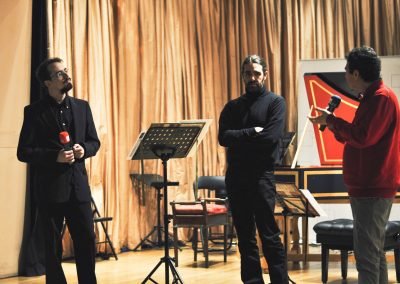 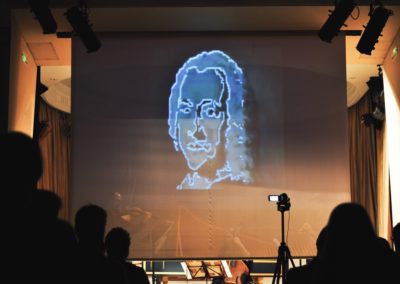 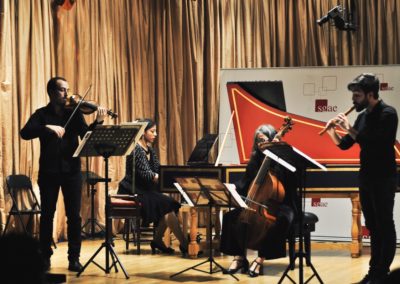